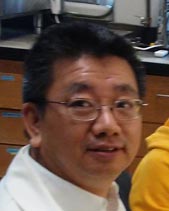 
Prostate cancer is the most common cancer among American men. Researchers do not know exactly what causes prostate cancer but, on a basic level, prostate cancer is caused by changes in the DNA of a normal prostate cell. Defects in apoptosis regulation are one main cause of cancer development and may result from overexpression of anti-apoptotic proteins such as inhibitor of apoptosis proteins. Although new treatments for prostate cancer continue to be investigated, no definitive cure has been found yet for the advanced aggressive stages. Resveratrol (RES, trans-3,5,4′ -trihydroxystilbene), a well-known natural polyphenolic phytoalexin present abundantly in red wine and other plants, is a component of Asian traditional medicine used to treat cardiovascular diseases. Recently, RES has gained considerable attention as an anticancer agent. Its potential use in chemoprevention and chemotherapy for various cancer forms relies on its effects on cell growth, apoptosis, angiogenesis, and cancer metastasis. As RES appears to have many anti-tumor effects on different cancer cell types, the molecular basis of these effects needs to be extensively studied using a cell culture model that best resembles the tumor environment in the body. This will allow us to better understand its mechanism of action and its potential use as a coadjuvant drug for established cancer treatments. To address this problem, we hypothesized that RES may be effective in inducing apoptosis by inhibiting/ acting some signaling pathways and represses the activation of drug resistant mechanisms by effective binding some proteins in prostate cancer cells. These hypotheses will be addressed in the experiments of the following Specific Aims: to (1) investigate the molecular mechanism of RES action on the activation of cell apoptotic pathways; (2) to investigate different expression of Cancer stem cell marker genes and identify different signaling molecules and survival molecules; (3) to identify the direct RES protein receptors responsible for its effect on apoptosis and inhibition of anticancer resistant pathways. The results obtained from this project will help us to understand the role of RES and anticancer drug metabolism in chemotherapy resistance but also its importance for the development of new important approaches and also may be applicable to other types of cancer and more importantly may enhance our ability to fight cancer progression.