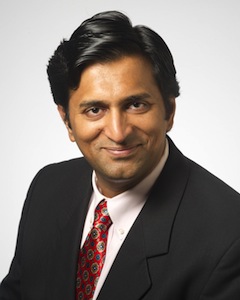 
Rickettsial diseases (RD) are widely distributed in the world and continue to cause seasonal outbreaks and epidemics1. The greatest challenge to clinicians is diagnosing RD at early phases when antibiotic therapy is most effective. This burgeoning problem is further compounded by the unavailability of rapid point-of-care (POC) diagnostics for RD. PCR and culture-based methods are the most sensitive techniques, however they are labor and time intensive, and so are not directly amenable to POC diagnostics. Immunofluorescence antibody (IFA) testing, the current gold standard for RD diagnostics depends on detecting host immune response, which may be too late of a stage for effective antibiotic treatments. To improve patient survival rates, novel POC diagnostics for pathogen detection are needed, which may not be as sensitive and differentiating as PCR but sensitive enough to detect pathogens in blood or blood products prior to host immune response. We propose using dielectrophoresis enhanced microfluidic impedance biosensor (DEP-e-MIB) to detect rickettsial organisms at ultra low concentrations in human serum samples. Impedance sensor (IB) applies a small sinusoidal excitation potential between two electrodes and detects impedance changes caused by the binding of target molecules to immobilized receptors (antibodies, DNA/RNA, proteins, and aptamers). Detection limits down to 10 bacterial cells/ml 3 , 0.02 fg protein (interferon-γ)/ml ml coupling of microfluidics and DEP preconcentration with IB has been shown to improve detection limits. During our past LBRN summer research project we developed a novel assay to overcome our inability to directly concentrate Rickettsia parkeri using DEP. We found that labeling of bacteria with beads allows trapping bacteria at low DEP bias not been combined with IB for real-time pathogen detection. 4, and 1 nM ssDNA 2, 10 5 have been demonstrated with IB. Additionally, 3 EID50 (avian influenza virus H5N1)/ 6. This technique has been previously reported 7, however it has not been combined with IB for real-time pathogen detection. The power of this technique over PCR and IFA lies in its ability to (1) detect target molecules at extremely low concentrations from small sample volumes (essential in early detection due to the low rickettsial cell count in serum), (2) screen for an array of etiological agents (important in developing symptomspecific diagnostics), (3) provide portable rapid diagnostics at extremely low cost (small working volumes associated with microfluidics and all-electronic detection), and (4) eliminate cumbersome, expensive PCR and DNA sequencing steps. DEP-e-MIB assays therefore, could potentially play an important role in early detection of rickettsial infections, and disease monitoring during antibiotic therapy. In working towards our goal of developing early phase rickettsial diagnostics, the specific aim of this project is to reduce the nonspecific binding of immunolatex beads in DEP-e-MIB Assays. We hypothesize that the use of suitable bioconjugation chemistry with co-immobilization of PEG on sensor surface will eliminate nonspecific binding of beads, and improve efficiency and specificity of pathogen isolation step in DEP-e-MIB assays. Aim 1 will be accomplished via two specific tasks. (1) Assess reduction in nonspecific binding via co- immobilization of polyethylene glycol (PEG) on sensor electrodes. (2) Investigate effects of immunoconjugation chemistry on pathogen isolation. We will utilize R. parkeri as the pathogen and deidentified human serum will be used as the spiking matrix. Depending on outcomes of this project, these results will enable extension of this technique to detection of other rickettsial species and testing with clinical and pre-clinical animal models of rickettsial infections.