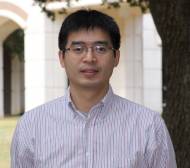 
Reactive oxygen species (ROS) has been implicated as an important underlying cause in cancer. However, the molecular mechanisms that connect ROS to carcinogenesis remain insufficiently understood. We propose the development of novel photonic nanosensors capable of direct and selective detection of ROS. The nanosensors will be used to monitor changes in intracellular ROS concentration and distribution during carcinogenesis. By correlating these changes to the regulation of key cancer biomarkers from parallel bioassays, we hope to elucidate the roles of individual ROS and the molecular mechanisms of such roles. During this reporting period, the reactivity of a fluorescent probe (2-TFMBS-Fluo) toward various ROS was examined. ROS tested include hydrogen peroxide (H2O2), superoxide radical (O2-•), hydroxyl radical (•OH), tert-butyl hydroperoxide (t-BuOOH) and hypochlorite (OCl-). First, the reaction kinetics of 2-TFMBS-Fluo toward different ROS was examined by incubating the reaction mixture at 37ºC in water bath for up to 2 hours. Fluorescence intensity of the solutions was measured at 20, 40, 60 and 120 min, respectively. The reactions between the probe and the ROS were found to be kinetically controlled and not complete within 2 hours. 2-TFMBS-Fluo was found to show specificity to H2O2 over other ROS. Only the probe solutions incubated with H2O2 and O2-• showed an increase in fluorescence intensity (Further test will be conducted to determine whether the increase in fluorescence intensity from O2-• is due to H2O2, a product of the dismutation of O2-•.). Other ROS (•OH, t-BuOOH, and OCl-) either quenched the fluorescence of the probe or showed no significant reactivity toward the probe. We plan to expand the selectivity studies to include other ROS. At the same time, we plan to incorporate 2-TFMBS-Fluo onto modified silica nanoparticles to obtain functional nanosensors for testing in a model cell system. In addition, the reactivity of two other probes, 3-TFMBS-Fluo and 2-CNBS-Fluo, will be characterized to study the effects of the type and the location of the substituent on the reactivity of the probe. The outcome of the selectivity studies will be used to guide the synthesis of additional ROS probes.